Adopt a shelter animal and you'll discover the joy of a unique friendship. Here are just some of the memorable characters from AWL shelters who transformed the lives of the kind people who took them home forever.

Mary was a “special needs” dog at the AWL's Ingleside Shelter. She has a neurological disability which affects her balance. When she arrived as a tiny baby with her litter mates, Mary struggled to coordinate her back and front end. She was a very wobbly little girl.

Her special condition meant it was hard to find the right family, and it seemed for a while as if she'd be at the shelter for a very long time.

Staff hoped her beautiful nature would capture someone's heart and help them overlook her physical problems. Mary's affectionate, relaxed disposition endeared her to everyone she met. When she visited some kindy kids during her stay, she was extra gentle with them. 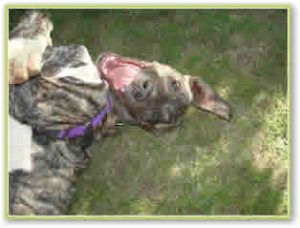 Still, it took time. And then, after five months, Mary finally met the special people prepared to take her home forever. Colin and Dianne fell in love with her captivating spirit immediately. She now lives happily with them and her new sister and playmate, Ann.

Mary and Ann are inseparable, bounding around the backyard together daily. Though they rumble constantly, Mary does need plenty of rest and has to be watched carefully so that she doesn’t over-exert herself or get too hot. Her weight is hard-fought to gain and maintain as she is still growing and has the teenager spurts that strip her of fat. 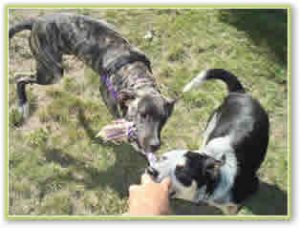 As a teenager Mary has no issues about playing then sleeping for obscene amounts of time by the back door. She has also been known to sleep away trips from Mudgee to Sydney and even Sydney to Melbourne.

“Mary is a great dog and a very much loved member of the family,” say her new family. They feel incredibly lucky to have her in their lives, and recently took her back to Ingleside to visit shelter staffers, who all fondly remember this gorgeous girl's time with them.

By his forever family, Jackie and Mike 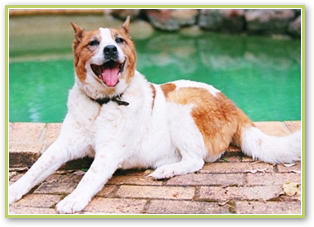 "Boris was adopted by us from the Animal Welfare League in December 1998. He was nervous and scared while riding home in the back seat of the car. When he got inside the house, he hid in the corner and it would take him a little while to pluck up the courage to venture out. Fast-forward a couple of weeks and he’s a different story, deciding that he quite liked the area - and though he had requested harbour views, he was satisfied with views of the bush!

Boris was one of the friendliest and gentlest dogs we had ever known. He loved kids, could bark at strangers (who believed that there was a Rottweiler behind the door!) - and never growled during the 12 years that we had him. He was a great 'talker' and loved to have conversations with his human mates.

Boris will never be forgotten…

A few days after he first arrived we were celebrating an occasion, and my girlfriend popped a bottle of champagne. He immediately ran for cover - and for years afterwards, would run upstairs if Lauren walked through the door. He had a long memory!

He loved walking in the bush and had this trick of running up to a certain boulder, waiting for us to catch up and flinging himself off - ready for us to catch him! Trouble was, as he got older he thought he could still do this and we had to make sure that he started to act appropriately for his age.

Boris brought a lot of joy and when we lost him in late January this year, it was a loss of something very precious in our lives. We think of him every day - and he is still very much part of us.

As I wrote on his plaque (he is buried at the bottom of our garden): "Boris - you gave us unconditional love and precious moments. We will never forget you." " 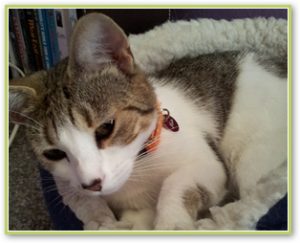 Mia was surrendered to the Kemps Creek shelter as a young kitten, with her sister. Her sister was adopted shortly after their arrival but Mia continued to wait for her forever home. As weeks passed, she was growing quickly, losing her 'cute factor' and becoming less appealing to potential adopters looking for a little kitten.

One day, an AWL Head Office staff member visited the shelter and spotted Mia, who was perched peacefully in an outdoor cat condo as staff walked dogs right past her. Struck by this little cat's composure, the staffer couldn't walk away. She adopted Mia, and they're now a very happy partnership.

Mia is a real character and loves to chase toys up and down the hallway. She is friends with the neighbourhood magpies who sit in a nearby tree and she often chats to them from the window sill. When her family are in the lounge room, she likes to sit in her bed next to them and enjoy their company- or pretend she isn’t just eavesdropping. 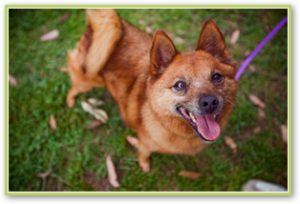 At eight years old, Gromit was one of the senior shelter dogs and was surrendered when his owner couldn’t care for him anymore. Gromit won the hearts of all of the staff and volunteers with such an enormous personality in a tiny body. Everyone was charmed by the little bloke's comical, cute waddle and his habit of looking back at his walker with a smile to check for approval and make sure someone was still with him.

Gromit had a long, eight-month wait for a new home, and during that time he was patient and calm, as if he knew it would happen eventually.

And it did. The perfect family, a lovely couple, came along and fell in love with Gromit in January this year.

Gromit has settled wonderfully in his new home, with long walks and lots of love. He even gets taken rock climbing. He recently accompanied his new mum, Gai, to her old workplace, a nursing home, to visit her friends - and they fell in love with the little man, too. "They had him jumping over things in the garden," says Gai.

Gromit took great pleasure in putting smiles on the faces of elderly residents – and seems to have enjoyed a fresh burst of youth himself. He’s been dubbed the 'pocket rocket' by his new family and even though he makes a valiant effort, he can never seem to catch any possum or bird!